"The Epidemiology of Firearm Injuries in Denver, Colorado" Report 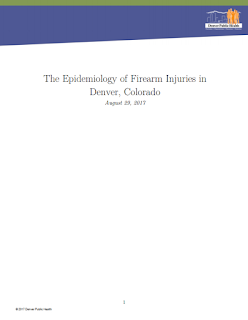 On August 29, 2017, Denver Public Health released a new report entitled: The Epidemiology of Firearm Injuries in Denver, Colorado which presents information about firearm-related injuries and deaths in the City and County of Denver, focusing primarily on the period between 2011 and 2015.

While similar analyses have occurred at the state and national level, this is the first report of its kind describing fatal and non-fatal firearm injury data for Denver.