CAMPAIGN "I GDL Because..." and April is National Distracted Driving Month

The "I GDL Because..." Campaign is happening now through April 30th!  Please pass along to your school partners. The goals of the campaign are to increase protective factors of positive social norms and connectedness and also to harness the power of youth advocacy to increase awareness of and adherence to GDL. 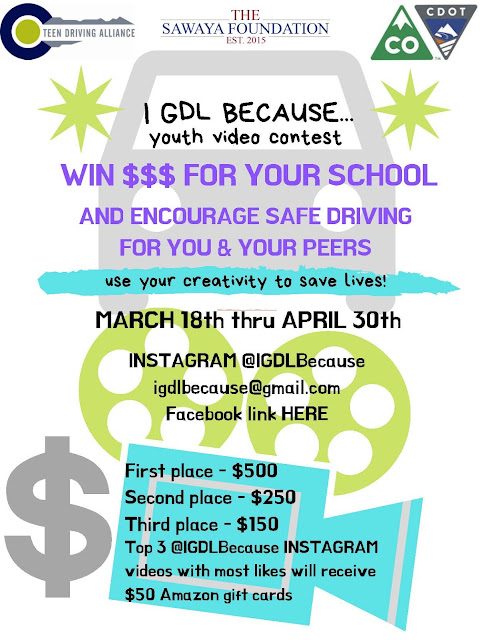 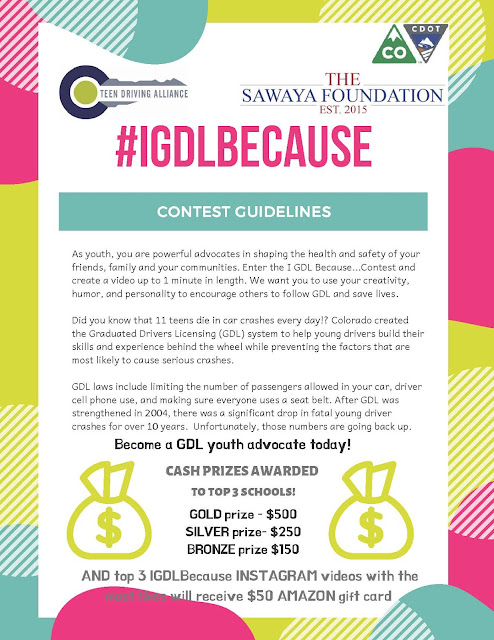 STATEWIDE — Every day in Colorado, distracted drivers are involved in an average of 43 crashes — many leading to serious injury or death. April is National Distracted Driving Awareness Month, and the Colorado Department of Transportation (CDOT) is leading the statewide charge to address this issue, which accounts for nearly 13 percent of all crashes on Colorado roads.

In 2018, 53 fatalities and 6,269 injuries were attributed to 15,673 crashes involving distracted drivers in Colorado, according to preliminary data from CDOT. Despite the serious consequences, more than 90 percent of people reported driving distracted in the previous seven days, according to a recent survey of Colorado drivers conducted by CDOT. In fact, in Colorado alone, there are an average of 2,380 intersection-related crashes and more than 9,000 rear-end crashes every year associated with distracted driving.

“Driving is a significant responsibility and demands our full concentration” said CDOT Director Shoshana Lew. “When you fail to pay attention behind the wheel, you put yourself and other travelers at serious risk — our data show that 43 crashes per day in Colorado involve distracted driving.”

Launching this week in conjunction with National Distracted Driving Awareness Month, CDOT’s Get Turned On campaign urges drivers with iPhones to turn on “Do Not Disturb While Driving” mode to prevent incoming distractions. Once enabled, the feature works by blocking incoming text messages and other notifications when connected to a car’s Bluetooth or when the phone detects the vehicle is in motion. Drivers without Bluetooth can also manually turn on “Do Not Disturb While Driving” mode. Android phones offer a similar function, and there are also other third-party apps designed to achieve the same goal regardless of the type of phone a person uses. CDOT has a list of these apps on its website at distracted.codot.gov.

“Do Not Disturb While Driving is a simple tool to help drivers turn off distractions and take back their focus,” said Darrell Lingk, director of CDOT’s Office of Transportation Safety. “It helps eliminate the temptation of quickly checking a text message or alert – a seemingly harmless habit but one that can have serious consequences.”

CDOT offers a variety of resources and app suggestions on its website to help Coloradans become distraction-free drivers, no matter what type of phone they use. The agency aims to educate motorists about the dangers of distracted driving through statewide education and outreach. For more information about distracted driving in Colorado and to learn more about the Get Turned On campaign, visit distracted.codot.gov.

CDOT has approximately 3,000 employees statewide located at its Denver headquarters and in regional offices throughout Colorado, and manages more than 23,000 lane miles of highway and 3,429 bridges. CDOT also manages grant partnerships with a range of other agencies including metropolitan planning organizations, local governments, and airports, and administers Bustang, the state-owned and operated interregional express service.  Governor Polis has charged CDOT to further build on the state’s intermodal mobility options.